From 1985 up to now quite a few changes have been applied to the design of the vignettes. Not only in the colour combination, but also in the field of security adjustments have been made in order to prevent especiallly reuse and fraud of the vignette. In this part of the site I will get to the core of this. 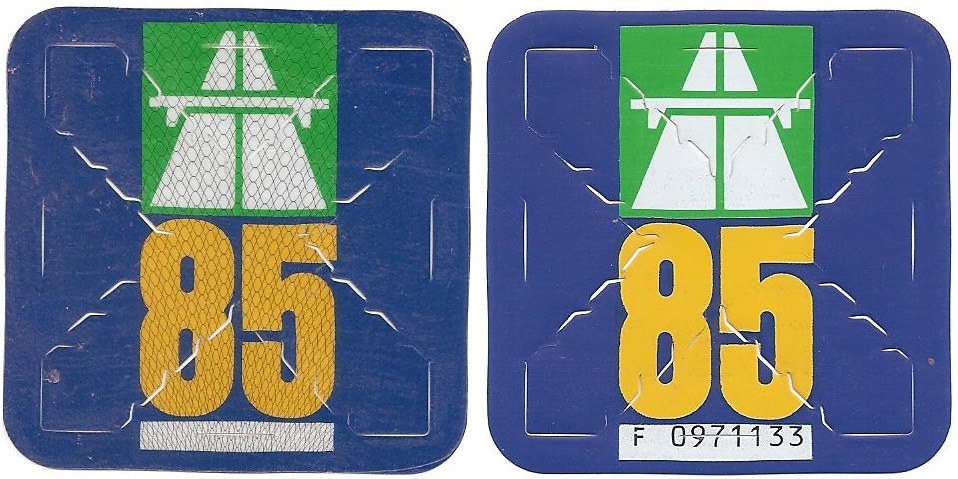 1995 – Because of a bad adhesive this year, a vignette with an extra coating. 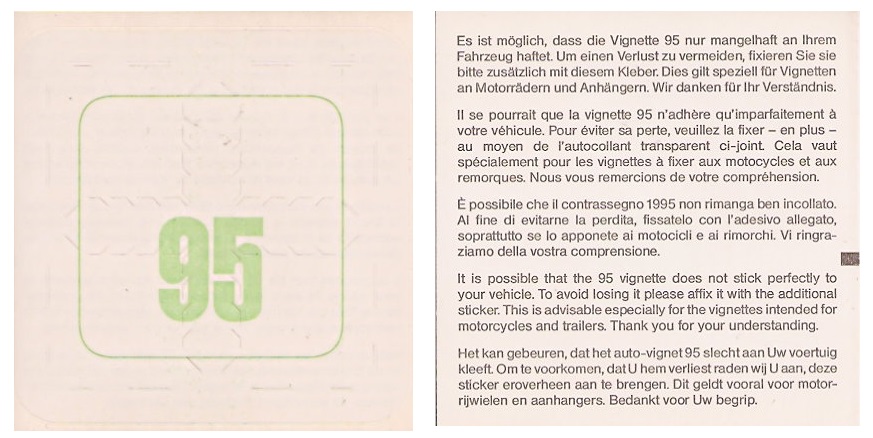 1996 – Changes in the colour combination of the year;

In 1999 a watermark was added to the vignette to prevent fraud. The watermark is the year of the vignette and visible on the back. The design includes a pattern of years spread over the vignette with a special detail that one year is turnedd round. That year is in 1999 on the right side of the vignette in sixth position.

In 2000 we find, contradictory tot the previous years, that the year on the vignette is completely visible No -00- but 2000 -99- instead of 1999. By this adjustment the watermark goes up to the top of the year and not down. Also here a year in the watermark is turned round visible. To make sure that the year on the back is clearly visible a light grey was selected instead of white. 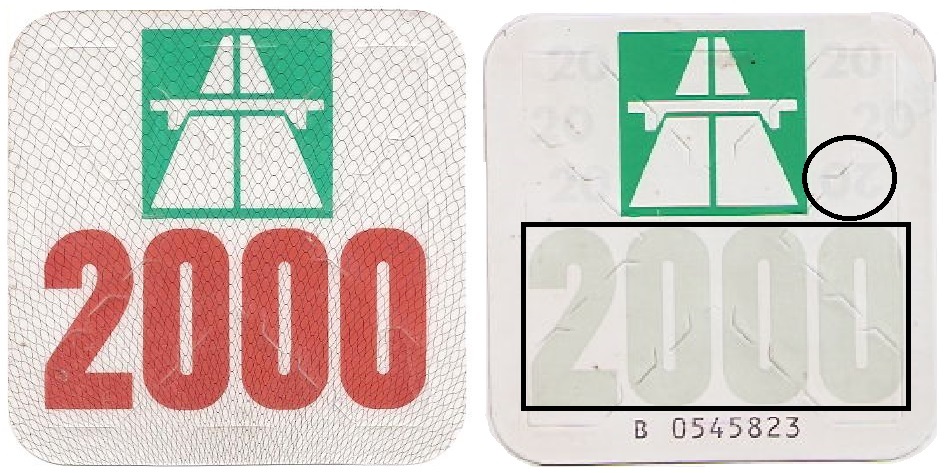 There are changes in the screen pattern of the vignette. The X-screen has on both sides of the X an angular pattern. In 2001 this angular pattern was replaced by curves. Since 1985 there has been an X-shaped screen through the vignette. This screen makes sure that when removing the vignette from the windscreen it will come off in pieces. This will prevent reuse.

2003 – Adjustment in the watermark

2005 – The “Jubilee Vignette” and the paint is crumbling off.

This year is a Jubilee year for the Swiss Autobahnvignet; the twentieth anniversary of the vignette. A year in which the Oberzolldirektion – in particular Mr. B. Rohner – wanted to celebrate esspecially by the issue of a special vignette. The jubilee-vignette has a new design at the front. The pattern at the back has been replaced by black outlined crosses and the turned round years in the watermark have got a different position. A shortcoming in the vignette is the crumbling off the colour after one year. When this came to light there were tests to be aware to apply this paint in the following years as well. This would have made the reuse difficult or even impossible . However, this was never implemented and in 2006 the ordinairy paint was used again. An article is devoted to the coming about of this Jubilee-vignette as shown in the menu “Images.”

After the previous background in the Jubilee-vignette, small ovals and curves had to make room for the crosses , a completely new design of the background was chosen for the front in 2006. This design no longer shows subtle curves but clearly fully black curves, which go from small to large from the inside to the outside. If being removed these full curves must have the quality to come off and leave a tranparency on that spot. So reuse will become more difficult.

In 2007 the small curves at the front received a derivative colour of the vignette. That was the intention,however, in 2007 not clearly visible. In 2008 this became clearer. The colour is now totally derived from the colour of the vignette. The background of the serial number was white till 2008. In 2008 the background became transparant. Now the serial number is also visible on the windscreen, though reflected. 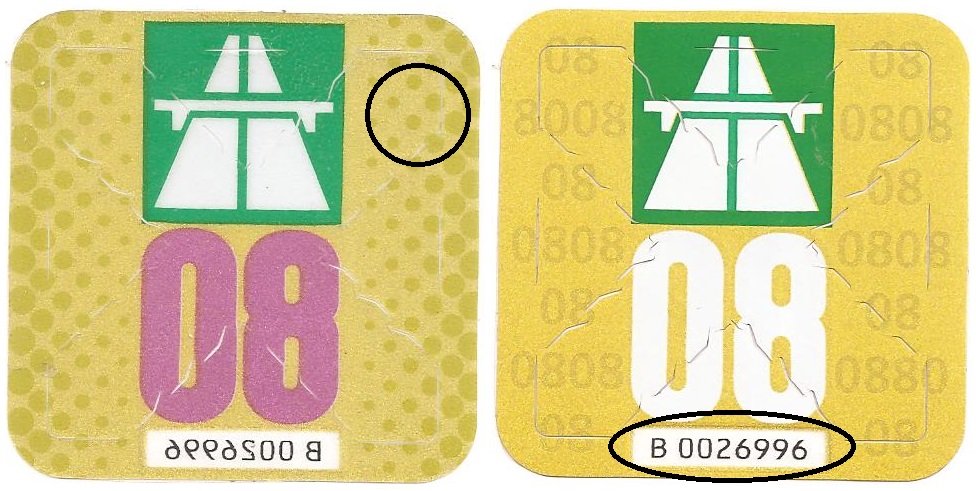 In 2009 the X-screen pattern disappeared. In order to prevent reuse another screen was placed. The now round screen consists of 3 circles and a round in the middle. The circles are only connected occasionally with one another and with the vignette. If removed from the windscreen, the vignette will easily fall apart. The X-screenr had in-between a more solid connection and therefore it became more difficult to fall apart. 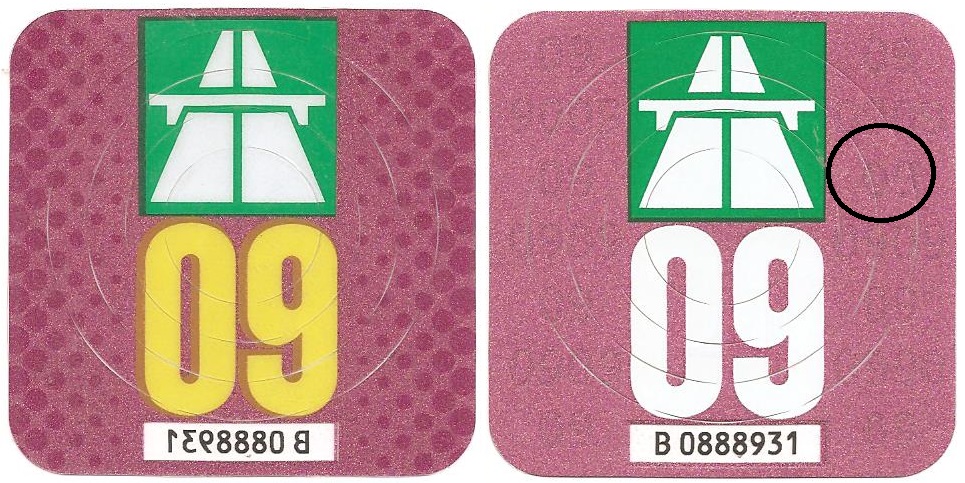 The watermark is in smaller print than previous years. 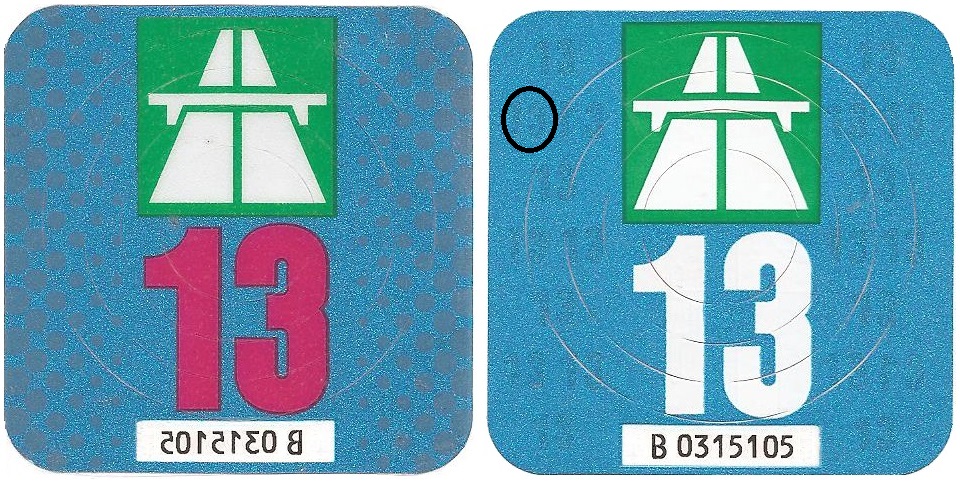 2014 – Colour from metallic to flat and the curves. 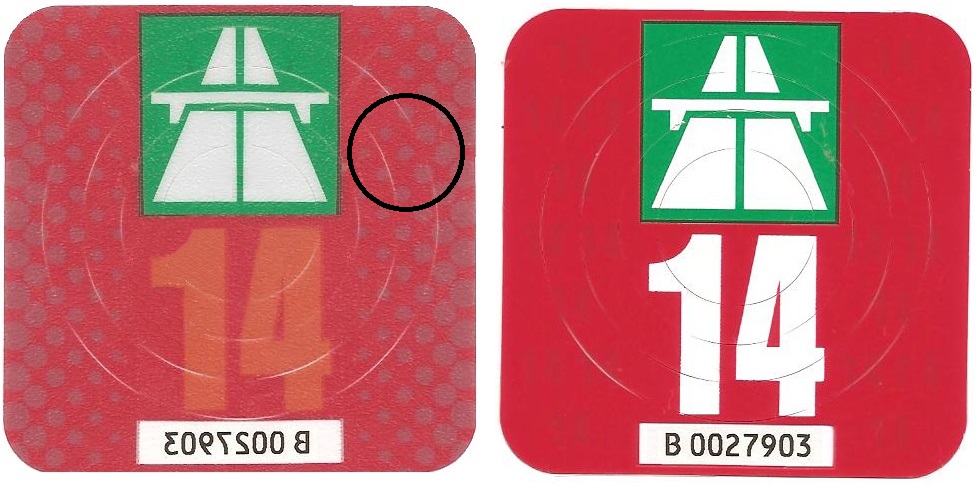 2015 – Colour from flat to metallic, the watermark large again and the curves. 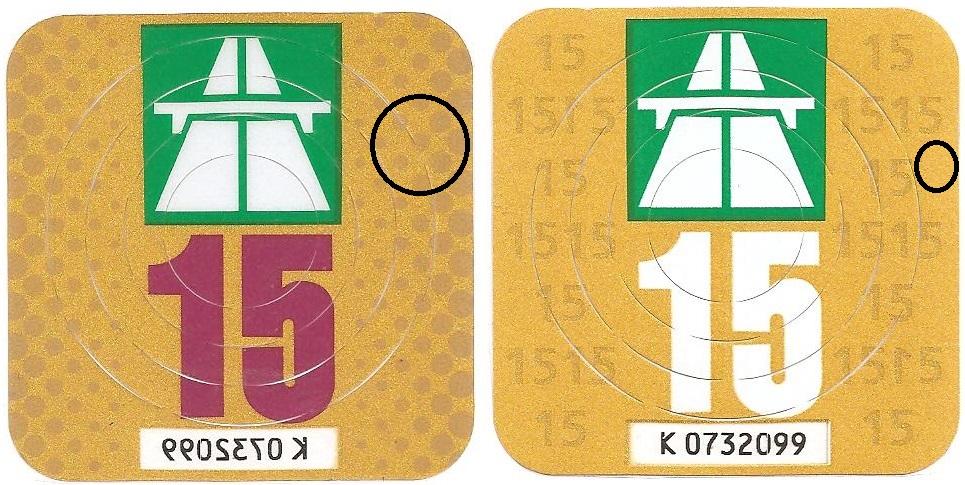 Number of days until the new 2023 vignette